You are here: Home1 / About Us

The Japanese Women’s Leadership Initiative (JWLI) was founded in 2006 by three visionary women in Boston, Massachusetts: Atsuko Toko Fish, Mary Lassen, and Catherine Crone Coburn. JWLI brings emerging women leaders, referred to as the Fellows, from Japan to Boston to receive four weeks of hands-on experience and training with successful nonprofit organizations in nonprofit management and leadership development. During their stay in Boston, the Fellows will develop an Action Plan, which will serve as a step-by-step roadmap to make their dreams of social change a reality. After returning to Japan, the Fellows are expected to make a difference in their communities based on their Action Plans. The purpose of this program is for the fellows to share the knowledge and experience they acquired in Boston with other women and social sector leaders within Japan.

The Fish Family Foundation, operating in conjunction with other Boston-based nonprofit organizations, is administering JWLI in partnership with Simmons College School of Management’s Center for Gender in Organizations.

In 2010, thanks to the generous funding provided by the U.S. – Japan Foundation, JWLI expanded its vision to hold public forums within Japan. Held in 2010, 2012 and 2013, these public forums provided information about the nonprofit sector and the American approach to philanthropy with hopes to inspire women to take leadership roles. The Forum Program reached hundreds of Japanese citizens, advocating for their involvement in addressing the needs of Japanese society.

Celebrating the 10th anniversary, JWLI hosted the Tokyo Summit at Tokyo American Club on October 18, and it was a huge success. Nearly 40 women leaders and JWLI Fellows candidly explored the theme of Women Leading Social Change in Japan with the audience of over 300 people. Mari Kuraishi, a founder of Global Giving, gave us a powerful keynote speech sharing her journey to start the organization. The Summit showcased JWLI’s 10-year impact by highlighting 10 alumnae and their achievements. Under the theme of Women Leading Social Change in Japan, the Summit’s most important message to the participants was to take action and be a leader to make positive social change in Japan.

The Fish Family Foundation (the Foundation) is a private family foundation in Boston. The Foundation was established in 1999 to formalize the family’s tradition of responsibility to improve its community and to share the joyof giving with future generations. The Foundation currently focuses on aiding immigration, at-risk youth, and people struggling with mental health.

In December 2012, the Fellows formed JWLIA with a mission to share the knowledge, learning and experience of JWLI to other women leaders in Japan. In addition to assisting recruitment, and pre-program preparation and engagement of the Fellows, JWLIA hosts workshops and symposiums annually, which are attended by hundreds of people every year. 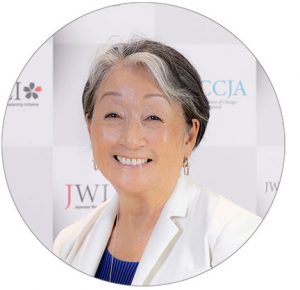 Atsuko Toko Fish retired as a U.S.-Japan cross-cultural consultant, and is currently involved with various social innovative movements as a philanthropist. She is also a founding trustee of the Fish Family Foundation. To accelerate social change by women leaders, Atsuko founded the Champion of Change Japan Award (CCJA) in 2017 and is launching the JWLI Bootcamp in June, 2019. In the wake of 3.11, Atsuko established the Japanese Disaster Relief Fund-Boston (JDRFB) to support immediate and mid-term recovery in Tohoku. Atsuko visited the effected region several times to assess and evaluate the fast-changing needs of the people and community. In the two years the fund was active for, JDRFB raised approximately $1 million and distributed 24 grants to 19 organizations and projects working directly in Tohoku. It has been reported by the grantees that JDRFB’s $1 million grants were leveraged for $6 million of economic impact.
Atsuko also served as a board chair of the Asian Task Force Against Domestic Violence (ATASK) for over 10 years, and a trustee of Simmons College. She was also a board member of The Boston Foundation (TBF), HANDS (Health and Development Service), the Japan Society of New York (JSNY), and Management Sciences of Health (MSH). She currently serves as an Overseer of the Museum of Fine Arts in Boston (MFA), and an advisory board member of Berklee College of Music.

In recognition of her achievements to promote U.S.-Japan friendship, the Ministry of Foreign Affairs of Japan awarded Atsuko with the Foreign Minister’s Commendation in 2012. In 2013, the White House named Atsuko a recipient of the Champion of Change Award in recognition of her accomplishments for empowering women in both the U.S. and Japan. In November 2018, Atsuko was conferred by the Emperor of Japan the Order of the Rising Sun, Gold Rays with Rosette for her contribution to the advancement of women’s leadership in the Japanese social sector.

The concept of the Associate Partners was born to create mutually beneficial partnerships between JWLI and like-minded organizations to foster the next generation of women leaders and to advance women’s empowerment in Japan. Contact Kozue Sawame if you are interested in becoming an Associate Partner.